UPDATE:
On September 1, 2020, the Court entered orders approving the class action settlements with Defendants Lupin Limited and Lupin Pharmaceuticals, Inc and the Warner Chilcott Defendants. Copies of the Orders are available on the Court Documents page of this website.

The deadline for TPPs to submit claims is September 21, 2020. Only TPPs (i.e., health insurers, employer-provided health care plans, union health and welfare plans or their administrators) should submit claims. Consumer Class members, individuals that purchased Loestrin 24 Fe, Minastrin 24 Fe and-or its generic equivalents, for consumption by themselves or their families, cannot get any payment. 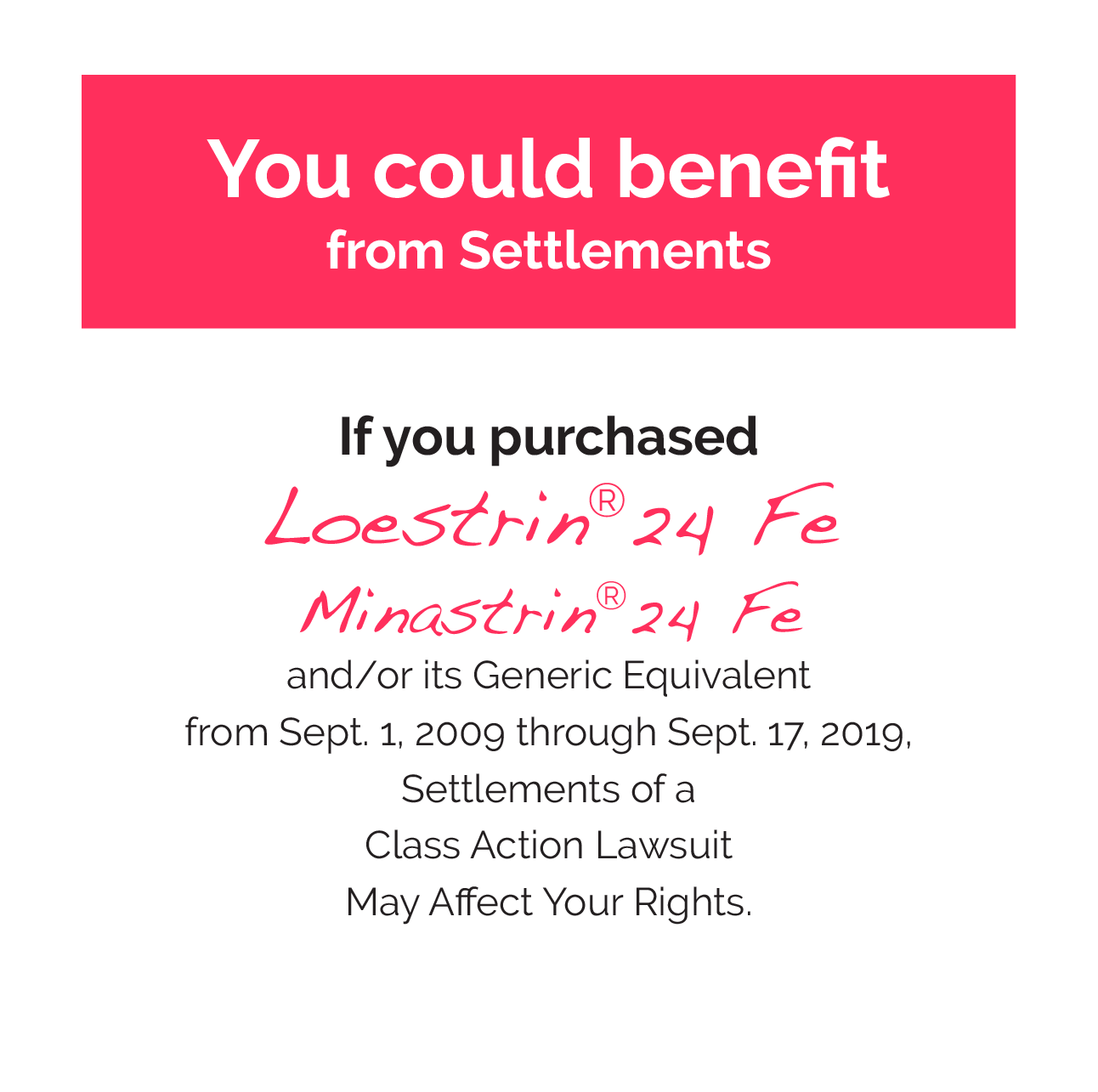 The information contained on this website is only a summary. You may download a copy of the Notice of Class Action and Proposed End-Payor Settlements by clicking here. Since this website is just a summary, you should review the Notice for additional details.

Settlement of a Class Action Lawsuit May Affect Your Rights

What Do The Settlements Provide?

Who Is Included In The Settlement Classes?

The Warner Chilcott Settlement includes only the TPP Class, and you are generally included in the TPP Class if you are a TPP (such as a self-insured health plan) that purchased, paid, and/or provided reimbursement for some or all of the purchase price for Loestrin 24 Fe, Minastrin 24 Fe, and/or generic versions of these drugs, for consumption by your members, employees, insureds, participants, or beneficiaries, other than for resale, in the United States and its territories, from September 1, 2009 through and until September 17, 2019.

You are NOT a member of the Class if you: (i) are one of the Defendants or their officers, directors, management, employees, subsidiaries, or affiliates; (ii) are a federal or state governmental entity, excluding cities, towns, or municipalities with self-funded prescription drug plans; (iii) purchased Loestrin 24 Fe or its AB-rated generic equivalent, and/or Minastrin 24 Fe or its AB-rated generic equivalent, for purposes of resale or directly from Defendants or their affiliates; (iv) are a fully insured health plan (i.e., plans that purchased insurance from another TPP covering 100% of the plan’s reimbursement obligations to its members); (v) are a “flat co-pay” consumer whose purchases were paid in part by a third-party payor and whose co-payment was the same regardless of the retail purchase price; (vi) are a “brand loyalist” consumer or third-party payor who purchased Loestrin 24 Fe and who did not purchase any AB-rated generic equivalent after such generics became available; (vii) are a judge in this case or a member of his or her immediate family; (viii) are a pharmacy benefit manager; and/or (ix) previously excluded yourself from the TPP Class.